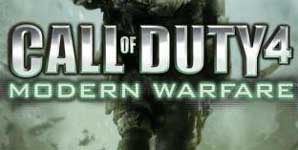 Call of Duty 4: Modern Warfare arms you with a ton of advanced and powerful modern day firepower and transports you to the most treacherous hotspots around the globe to take on a rogue enemy group threatening the world. Call of Duty has always been a good game and I am so pleased to see Activision have dropped the WWII clichés and gone for some thrillingly chaotic modern warfare. With a beautifully rendered, if not rather short, story mode, excellent multi-player/online mode and amazing audio COD4 has set new standards in console warfare and it's a more than welcome addition to the Xbox360's strong arsenal of games!

As both a U.S Marine and British S.A.S. soldier fighting through an unfolding story full of twists and turns, you use sophisticated technology, superior firepower and coordinated land and air strikes on a battlefield where speed, accuracy and communication are essential to victory.

Call of Duty 4: Modern features an available arsenal of more than 70 new and authentic weapons and gear from assault rifles with laser sites, claymore mines, .50 caliber sniper rifles, and M-249 SAW machine guns. With accessories like night-vision goggles and ghillie suits, for maximum concealment, Call of Duty 4: Modern Warfare has players locked and loaded to accomplish the mission.

The title covers the modern battle from the soldier to the satellite, where the need for air support is critical to success. The adrenaline rush deployment enlists you to fast-rope from tactical helicopters, ride in an armada of attack choppers, use jets to remove enemy strongholds and even engage hostiles from thousands of feet above the ground inside a state of the art aerial gunship.

Featuring stunning next-generation graphics, you will be drawn into the cinematic intensity of Call of Duty 4: Modern Warfare. Amazing special effects, including realistic depth of field, rim-lighting, character self-shadowing, texture streaming as well as physics-enabled effects will pull you into the most photo-realistic gaming experience ever. Combine the lifelike graphics and the realistic battle chatter with the Call of Duty award-winning sound design and you will face battle as you have never before. I cannot stress how brilliant the battles are and how much depth and scope all the environments have.

If you are looking for a quality FPS this Xmas then you need to be considering Call of Duty 4: Modern Warfare. The game is a fantastic package, graphically it pushes the boundaries, the sound is awesome, all of the scenarios are thoroughly encapsulating and the smell of war is definitely in the air. The only negative is the length of the story mode...simply not long enough, but I would rather have a short and amazing story mode than a long and boring one! Any day!