'Loaded Gun', the new EP from Chrystyna Marie, will drop at the end of February 2016. Chrystyna was born and raised in Toronto, Canada, where she immersed herself in the music of Etta James, Otis Redding, Janis Joplin, Selena and Christina Aguilera. Definitely a Blues/Pop/Rock artist, with a massive dollop of grunge on top, her sound is unique enough to attract attention, primarily because of her flexible voice, which one moment grinds like Janis Joplin and the next moment demonstrates a childlike sweetness. It's a voice that can only be described as "powerful." She doesn't shriek or yell, she just projects like a howitzer. 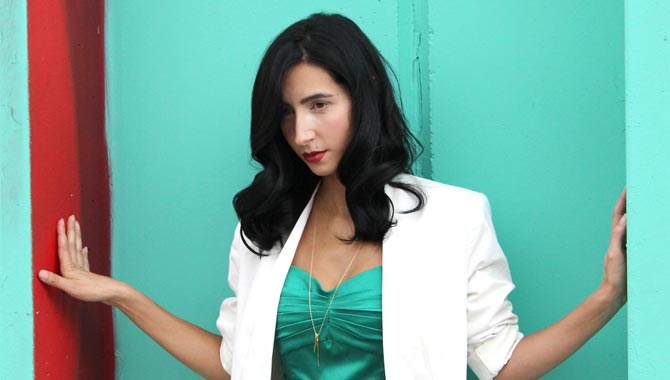 Moreover, there's an arcane accent or burr inside Chrystyna's voice that's difficult to label, almost like the German umlaut that stymies native English speakers. Except in this case, it's a vocal circumflex of some depth, a hint of baritone. Not quite guttural or rasping, it is nevertheless charming and provides the songs on the EP with a delightful throatiness.

'Loaded Gun' contains four tracks. The first two tracks are grungy blues tunes; the last two tracks would probably be characterized as indie-pop tunes. All four are excellent, depending on what the listener is in the mood for. First up is the title track, 'Loaded Gun', whose lyrics portray love as a loaded gun. Grungy, bluesy rock best expresses the song stylistically. The song's tempo is medium leaning toward slow. Superb drumming - extended snare and cymbals - drive the beat and set the stage for Chrystyna's strong, voluptuous vocals. In the dimming and crystallizing of the melody lies a nice chorus. Whoever produced and arranged the song deserves a pat on the back. It's good stuff. The second track, 'Down The Road', is another grungy blues rocker. Guitar and vocals form the intro; then the song ramps up into an Elvis Presley-like Southern blues number. And somewhere in there is a hint, just a dab-will-do, of country western. While not quite the equal of the first track, it still stands out.

'No More' is the first of the two indie-pop tunes. Starting off with piano, drums and vocals, the only accurate way to describe it is to say it's a much "prettier song." The vocals are softer and sweeter, eschewing the introduction of any type of earthiness. This gives Chrystyna the opportunity to exhibit her range as a vocalist. Initially, the contrast is so stark to the first two tracks that the listener wonders if it's the same person.

The final track is entitled 'The Tower', another indie-pop tune with a slower tempo. The vocal accent referred to above is most evident on this song, which carries a slightly religious undertone. In the middle of the song, where one expects some type of instrumental solo, Chrystyna instead warbles to great effect. It's a captivating touch and difficult to pull off. Chrystyna does so effortlessly.

'Loaded Gun' is an eloquent, half-raw, half-pretty EP, highlighted by poetic arrangements, clean production values and the brilliantly superior vocals of Chrystyna Marie, who is for all intents and purposes the real deal. 'Loaded Gun' is worth the price of admission.