Chris Whitley and the Bastard Club - Reiter In Album Review

Chris Whitley and the Bastard Club
Reiter In
Album Review 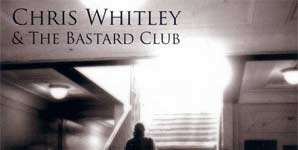 Chris Whitley died last year, at the age of 45, leaving behind a wonderful raw music legacy, one in which anguish and intensity were communicated through slide blues guitar, a gorgeous low howl of a voice and remarkable rhythm. His blues-jazz leanings were probably closer to Miles Davis or Chet Baker rather than Howling Wolf. Reiter In is a little bit of a ragbag, of Whitley originals and covers (Gary Numan, Willy Dixon, Kraftwerk (on a banjo!) to name some). Reiter In, recorded after his diagnosis with advanced lung cancer, harks back to the old Chris Whitley - one whose inclusion on the Thelma and Louise soundtrack seemed to signal an exciting new prospect, but who also wilfully pursued his own direction instead of seeking stardom. Its sound is brittle and abrasive, but also slightly more accessible than Whitley has been in the past few years (if not quite so much as the lovely Australian-only Jeff Lang duet album). Whitley was clearly a perfectionist to the last, a deeply authentic individualist - Reiter In is a great sign-off.