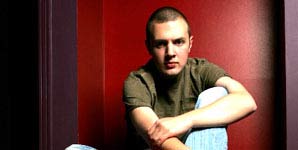 Saturday nights in Leeds are all about Glasshouse.

This longstanding club night has a loyal and knowledgeable fan-base, which has followed it from venue to venue, over the years, until it has finally found the perfect home at the excellent Mission club in Heaton's Court, off Lower Briggate.

Mission was completely refurbished at enormous expense last year making it one of the best clubs in the north of England; and with every musical taste catered for on different nights of the week it has become the venue of choice for serious clubbers in the Yorkshire area and beyond.

So it's not surprising that they have no trouble attracting top club brands such as Vibealite, Kissdafunk, Poptastic, Tidy, etc etc. and along with that some of the country's top DJs.

Last Saturday was no exception when 25-year-old Aberdeen based DJ Chris Lake hit the decks in the main room.

Chris is already well known for his collaborations with Sebastien Leger, though his tracks have been supported by Sasha, Sander Kleinenberg and Nic Fanciulli, amongst others, and for his smash hit single 'Changes', which was released in 2005.

This was picked up by Pete Tong and, indeed, was selected as Pete's 'Essential New Tune' in December that year.

Since then Chris has been in great demand and now tours the world building up a loyal following of enthusiastic music lovers.


As well as regular appearances all over the UK this year Chris will also be found performing in Madrid, Moscow, Latvia, Iceland and Sweden and has recently returned from a very successful trip to Australia.

He will also be found at the brilliant Cream nights at Amnesia in Ibiza this summer as well as Godskitchen's Globalgathering.

If you don't manage to get to see him live you would do well to get his excellent new single 'Carry Me Away', which he wrote and produced himself (featuring the fabulous voice of Emma Hewitt).

This will be released on May 14th on Chris's own label, Rising Music.

Rising Music is collaboration between Chris Lake, Sebastien Leger, Micky Slim and Renee Amesz and there have been several releases already (Aqualight is particularly good) with more in the pipeline.

Currently Chris is working on a studio album, which could be out by the end of the year.

If the reaction of the Glasshouse crowd, and the reception his playing got are anything to go by, Chris Lake is definitely a DJ on his way to the top and we are going to be hearing a lot more about him, and from him, in the future.