Speaking of movie soundtracks, Chris Wirsig, who hails from the Los Angeles area, composed the original motion picture soundtrack for a movie called 20 Matches. Referred to as an electronic/ambient artist, Wirsig writes the music for movies. 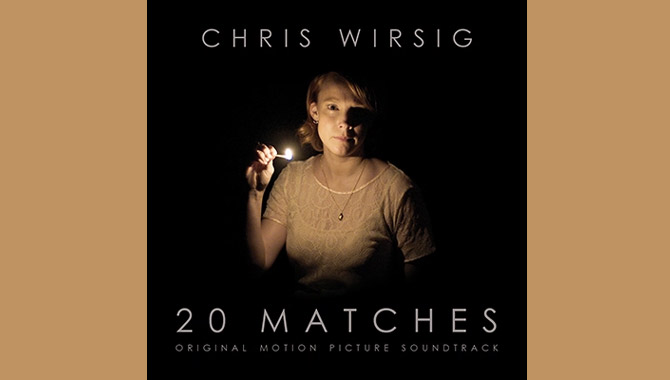 When it comes to movie scores, both objectivity and subjectivity enter the situation. Put simply soundtrack music can't stand on its own two feet; it needs a movie to complete it. Likewise, a movie, any movie, can stand without music, but just barely. Without music, even the best movie teeters on the edge of disaster. Watch a 1920's silent movie and you'll get the idea. Without a musical score, it's like watching a bad cartoon.

In other words, you can't review a musical score without reviewing its context, the movie as a whole, including the music.

That's what happened with Wirsig's score. By itself, it's kind of interesting, but it has no context and, seemingly, very little melody. It's good stuff, but there's no frame of reference. Then I went looking for 20 Matches, which is a short dark flick about a serial killer. Over the course of twenty years, the evil antagonist murders one woman per year.

Lighting for the flick is provided by matches burning in front of the narrator's face. A very chilling visual effect. And when Wirsig's music is added to the mix, the effect is emancipating, cathartic. The visual images create an image in the visual region of the brain, while the soundtrack impacts the aural region. The brain receives the impressions and translates them to proximate concepts, which frankly scare the hell out of you.

The impact of Wirsig's score is tantamount to the score in Hannibal, starring Anthony Hopkins as the cannibalistic psychiatrist. Tones of sepulchral gravity intensify the darkness; vile concatenations lurk in the background. The visual and the aural combine, creating an ambience full of dread, taut and foreboding. Together, the sensations occur cerebrally, circumventing the glottal and olfactory apparatus. The visual and aural speak to the soul. It's a soul experience and one that is terrifying and mesmerizing at the same time.

Some reviewers liken Wirsig's music to John Carpenter or Trent Rezonor. The analogies carry credence. For me, Wirsig's score is reminiscent of Hans Zimmer, who did the soundtrack for Hannibal.

It's grand, magnificent music and Wirsig is a genius.