Review of The Amplification Of Mr Ballad Album by Chapman

Looking rather like a combination of The Modfather himself, Mr Paul Weller, and Frank N' Furters creation, Rocky, the South Coasts very own Chapman is somewhat of a curiosity. His look of contrived cool (He has even given credits on his new album sleeve to his hairdresser! [email protected] if you were that interested) does not sit comfortably with the tired, old fashioned, easy listening by numbers balladry.

'The Amplification Of Mr Ballad' is one of three albums to be released simultaneously. The other two, 'The Bare Bones Of Mr Ballad' and 'The Remix Of Mr Ballad' contain exactly the same eleven songs. They are being touted as '3 stylistically different albums'. Bare bones is as you might expect, everything in its rawest form, acoustic, no over dubs or electronic wizardry, etc. The Amplification is the songs with full production, enhancement and studio treatments whilst The Remix is what it says and intended to deliver Chapman onto the dance floor!

This is only Chapman's second solo album, a follow up to 2006's 'Unexploded Bombshell', an album that saw some success. Having been described by the BBC as 'An amazing talent' and having had some air play on Radio2, Chapman has not been without his supporters. It was they, through his MySpace page, that coined his achingly laborious nick name, Mr Ballad. That he should choose to adopt it and flout it is probably the clearest indication that his music, whilst moderately acceptable, is never going to be that great. 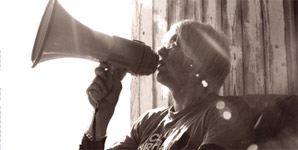 The songs on The Amplification Of Mr Ballad are all pleasant enough. Chapmans voice even has a 'lived in' quality that gives it some character. However, although his demographic may be all encapsulating, going for the mass market unfortunately means that it is lifeless. Knowing that your Auntie, Granny and young Niece can all appreciate a young man who can carry a tune doesn't lead to inspiring music.

Chapman comes across as an old fashioned Saturday evening light entertainment show turn. 'Live from Blackpool's Pleasure Beach, it's Little & Large with special guests The Crankies and Chapman'. Somewhere between Elton John, Neil Diamond, Robbie Williams and Leo Sayer, Chapman sits as a latter day balladeer. Lyrically Chapman visits love, loss and longing but without anything new to offer. The message veers between the extremes of the saccharine sweet 'Beautiful Time' to the cliched reflection of 'That Thing'. In between the extremities of delivery are a few decent, if a little soulless, songs. The opener, 'Hum Along' with it's slight country flavour and stringed backing, flatters to deceive. 'The Edge Of The Island', although a sometimes clumsy attempt at addressing today's green issues, has a nice arrangement and uses Chapmans vocal to best portray its emotional tones.

The Amplification Of Mr Ballad is an album out of time. Trying to interpret it in three different ways and releasing them all simultaneously seems foolish. Choosing to take the middle of the road, unchallenging, safe but mundane route leaves us with an album lacking purpose or imagination. And calling yourself Mr Ballad?

Ladies and Gentlemen, I give you, 'The Sound Of St Leonard's'.