CC Dust are a brand new synth-pop duo emerging from Olympia, Washington. From the little amount of music they have out, the 'Never Wanted To Die' single as well as their 'Shinkansen No.1/New Ways' 7", CC Dust have established their sound as one that owes much to the 80's with lavish textures, four-to-the-floor danceability and some post-punk moodiness in vocalist Maryjane Dunphe's delicate tone as well as the anguish underlying in bassist/producer David Jaques slick sonic textures. Going off the basis of these gems, CC Dust have all the potential to go the distance in synth-pop and tonight in Leeds they display their potential as a legendary live act too. 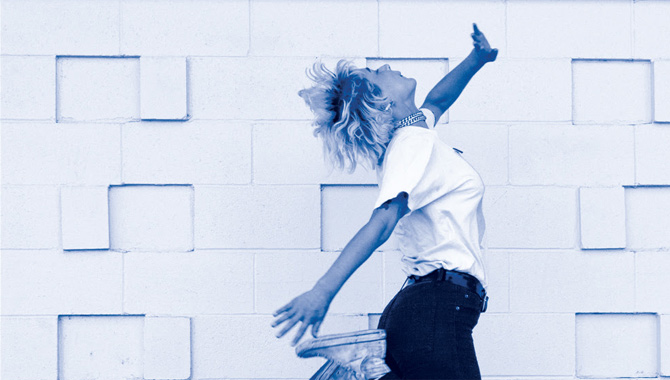 First though we have wonky, one-woman lo-fi from Kathy Gray, aka Mia La Metta where cute, childlike beats play in the background whilst Gray delivers breezy guitar and warm vocals, making for a friendly atmosphere.

Next up is Nachthexen who deliver synth injected feminist punk as topics such as the pressure from society to diet as well as lad culture are tackled against with vicious vocals, whilst being backed up by stompy rhythms and bendy synth.

Badaboum carry the baton with odd, gypsy-like, witchlike punk the way the vocals are monotone but simultaneously alarming and the keys are devilish, making for this menacing carnival vibe. For pretty much every song the members all switch around to different instruments, adding to the raw, primal nature.

CC Dust hit the stage with about as bombastic a performance as you could expect in the synth-pop realm taking place in low-key as a setting as the DIY Wharf Chambers. It doesn't start off explosively, but certainly intriguing the way Dunphe is doing this very robotic and reserved dancing in how her arms just rotate about, but constantly remain in this guarded stance. However, after the first song or two she's suddenly a beast as she descends into the crowd and becomes uncaged, flailing her arms everywhere, rapidly twirling, criss-crossing, stomping and strutting across the room.

There's a hell of a lot of emotion put into this performance. Not only just the sheer passion and energy in how Dunphe moves, but there's also an element of sorrow in how she constantly has this harrowing look on her face and her dancing seems to be such a release for whatever's troubling her deep down, not to mention her solemn vocal delivery.

Jaques isn't as lively, instead just providing a backbone, producing firm, bouncy basslines all whilst all the sparkly beats emit from a laptop. It's no problem though as the music is rather brilliant and Dunphe provides more than enough energy. It's impossible to tire of watching her move, the way it's so stimulating and it's all the more credit to her that she puts everything into her performance despite there just being a handful of people here.

The show ends with Dunphe saying something along the lines of 'in all honesty, I desire, desire', unplugs her mic, slams it on the ground, goes to have one last freak out of being a hurricane on the dancefloor, then slops down on the edge of the stage, with her face in her hand looking distraught. It was a slightly abrupt, but ever impactful end to the show and left you not only hungry for me, but intrigued about this person.

In short, CC Dust rule. They have a lush, vibrant sound and put on a whirlwind of a show, even if it's just one person propelling the madness. This is a band who have the potential to be the next greats in synth-pop and they're a band you're not going to want to miss should they ever come to your town.