Review of Succession Album by CB6

A band logo not to dissimilar to that of the Royal Mail's, brands the image of what can only be perceived as a painting of King Harold (Harold Godwinson) being shot in the eye with an arrow, fronting the album artwork of debut album Succession from CB6. 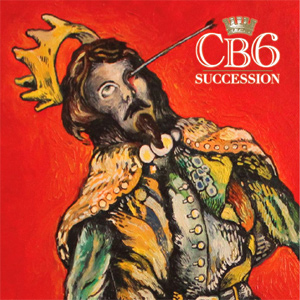 Despite their Essex roots it's fair to say they won't be played on The Only Way Is Essex (unless there is a belligerent, destructive fight for which the music fits perfectly to). With aggressive metal riffs and hardcore vocals, CB6 prove to be a combination between classic and modern metal, creating their own defining sound in a close quartered genre.

Front man, Ryan Monteith quickly counts/shouts to four allowing you to rapidly prepare yourself for the succession of hard drumming, shouting vocals and quick guitar riffs, followed by low power chords not to dissimilar to classic thrash which make up opening track 'Perfect'. The track lives up to its high standard name despite the consistent tempo and similar riffs expected from the genre.

Track 'Crown' provides some explanation into the album artwork with defining lyrics 'Every king will lose his crown' expressing some personal feelings towards power and royalty, taking a stand through their music. This is also noticeable on track Succession: 'King of the hill, the arrow I trust'.

95 second song 'Illusion' contains more energy, aggression and in some cases musical notes then the majority of current songs being released in today's industry and helps the pace of the album flow more fluently.

The album comes with a lyric book allowing you to appreciate the poetic lyrics which can often be ignored when being screamed at you over loud and angry music. The booklet also contains thanks from band members to friends, family fans and (perhaps surprisingly) Jon Bon Jovi.

Despite what the opening track suggests the album is not perfect and becomes flawed particularly towards the end where the riffs feel recycled from previous artists (Kreator & Machine Head) and in some cases from some of their own previous songs as the similarities between Cold Season and Casualty prove. However, CB6 have created a debut album worthy of recognition, paying their respects to classic thrash whilst maintaining a fresh new sound, as time goes on the future of CB6 is sure to develop with experience.