Leeds four-piece Cattle have been one of the best kept secrets in UK noise-rock for some time now. If you’ve ever caught Cattle live then you’ll know that their sound consists of precise and cascading rhythms from two drummers, Chris Riviera’s raw, sharp vocals and no guitar, but instead just thick, dirty, effects-heavy bass, all of which makes for devastating soundscapes. They finally have a debut album to their name in the form of ‘Nature’s Champion’ which sees Cattle capture their primal magic. 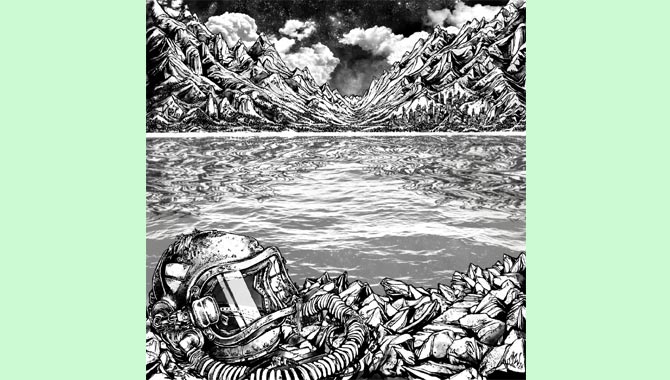 ‘Tanking The Piss’ kicks this thing off with creeping up bass and light percussion which builds up until bursting into an explosion of stomping fuzz and vicious, wraithlike vocals made by delay effects, all of which makes for a whirlwind of chaotic noise. Towards the end all the elements come together in stampeding unison making you want to throw your body everywhere.

‘Caring’ features some piercing stabs of feedback which is contrasted with both thick walls of distortion and solid grooves. This song starts out speedy, but slopes into a more sluggish, ominous nature, only to then return to chaos with a hectic barrage of crashing drums and stabbing bass. ‘Acrylic’ is another track which builds and builds with slinking basslines, until the distortion is let loose and the colossal riffs continue to give you a beating.

Cattle are certainly a band that go by a formula, with their sound often featuring tiptoeing basslines and percussion, explosive breakdowns and vicious, effects enhanced, vocals. However, it’s a solid formula and things never feel repetitive and are at all times captivating in just how masterful Cattle are at handling both quiet and loud dynamics as well as how raw and primal the nature of the music is.

‘Fears and Hesitations’ is slow burning and derelict in how the bass feels like a wounded person crawling to the hospital in how dragging it is, but the omnipresent firmness keeps you locked in and captivated.

Closer ‘Moon Crawl’ is the one song where there isn’t a (seemingly) inevitable sudden burst of a racket. Instead this track just plods along, but still balancing dynamics well with the bass switching between being loose and being nasty when distorted whilst Chris Riviera continuously barks vicious lines like ‘You lonely little pr*ck, you’ve done this to yourself’. There’s also some sweet sax aiding this track which contributes to the wobbly atmosphere by being free and wild, especially when the bass gets tougher, like the two instruments are in a contest to make the most impact.

If you’ve got even the slightest interest in the noisy and abrasive, you need ‘Nature’s Champion’ in your life. This record doesn’t slip-up once when it comes to delivering the gnarly and always excels in its field whether it’s being slow or fast, brooding or crushing, wirey or punchy. A highlight in aggressive music in 2016 and a sign of a promising, pummelling future for Cattle.