Review of Collisions Album by Calla 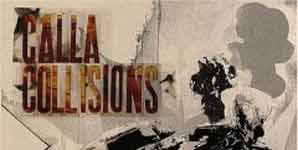 From that seemingly endless well of musical talent that is New York City, Calla are a trio who first formed in 1997, although they've since lost and gained members. "Collisions", which has already been released in America, is their forth album, and features the mixing skills of PJ Harvey and Nick Cave cohort Victor Van Vught.

The record opens with lead single "It Dawned On Me", an indie number that can simply be described as mediocre. With a good few years behind them, it's not really possible to say Calla copy the Snow Patrol sound, but that doesn't stop "Initiate" being extremely reminiscent of "Run" – just not as good. A lazy tempo characterises "This Better Go As Planned", all leading up to what is ultimately a disappointing climax, but just as things are sounding bad, along comes "Pulverized". Brooding and dark, it has some great lyrics that are enhanced by the whisper-like vocals of Aurelio Valle, and is the first track to make you sit up and take note.

And then "Collisions" takes a turn for the worst again. Like a toddler yet to master speech, "So Far So What" lacks coherency, and "Stumble" and "Imbusteros" drift by without making an impression. Perhaps the dullness of these tracks is a devious scheme, because the fuzzy guitars and pounding drums of "Testify" are fantastic. Calla show themselves perfectly capable of taking the volume up while still sounding sentimental, and to emphasise this point they follow it with another cracking track, "Swagger". It's quite aptly named, as the mixture of sharp and melodic guitar, together with funk-infused rhythm and layered strings, is the sound of a band with confidence. Granted they end the album with another song that is the worst bits of the 'Patrol, but there's hope for Calla yet.