Review of Strength in Numbers Album by Calla 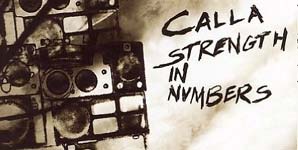 Calla's 2006 album Collisions was a wonderful little secret for anyone who'd be particularly keen on a Dandy Warhols/ Joy Division mash-up.

Strength in Numbers returns some of the experimentation to the band's sound, but with restraint, now that they have managed to become more accessible. There is enough cocoa content to make this a particularly dark affair - like Greg Dulli's Twilight Singers, there is a deep soundscape that is rarely upbeat, but every song has a delicious melodic core, sometimes heading towards the sound of dEUS, but more often staying close to the 80s rock/ slow core sound, with barely-above-whisper vocals, and heavy guitar presence. The album picks up energy and pace with both Rise and Bronson, which are like Snow Patrol with added peperoni and anchovies - each is followed with a comedown song just in case you get carried away - and either would make a great single from this album.

Calla deserve an audience from the goth and screamo kids who've grown up wanting more substance - Strength In Numbers continues a rich vein of form.