In a relatively short period, Cabbage have released a few EP's and continued to mesmerize a growing fan base with their incredible live shows while supporting the likes of The Coral. It comes as little of a surprise to learn that they're being dubbed as one of the best bands to emerge in 2017. 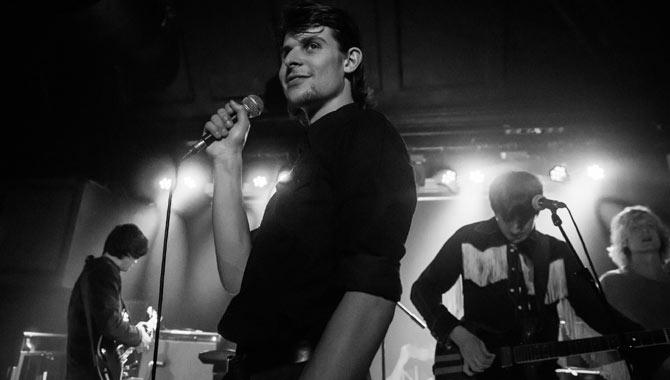 The one thing about Cabbage is it's not what they are wearing at a gig but what they are left wearing by the end; Guitarist Joe enters the stage in a rather fetching hat, jacket and shirt but by the end of their set, he's left in his trousers alone, sweating from head to toe. Frontman Lee manages to hold back on the shedding of the clothes but makes up for that with his climbing up speakers and swamping himself into the sellout crowd. It's antics like this that have people intrigued, hooked and loving every minute.

The next hour gives the Nottingham faithful the chance to disappear into a place away from the dull, cold weather and forget about the prospect of having to be up the next day for work - probably feeling slightly worse for wear. Cabbage don't disappoint by smashing straight into 'Dissonance' and like a perfect DJ set, they're seamlessly into their next song 'Indispensable Pencil'; not a bad way to get The Bodega sellout crowd buzzing, bouncing and generally up for having a great time without a care in the world.

The whole set is filled with high energy fueled mayhem 'Terrorist Synthesiser', the eyebrow raiser 'Dinner Lady' and naturally 'Uber Capitalist'. It does beg the question, why does it take a Northern band to get people excited and let themselves go into the moment?

The highlight of the night had to be 'Necroflat' the whole venue erupted! Although Cabbage have already released three EP's, they still manage to find time to keep on writing and share their new song 'Gibraltar Ape'.

'Kevin' finishes off the night and it's brilliant.  It came as somewhat of a surprise that the set list didn't include the track, 'Free Steven Avery (Wrong America)' as for their motives for doing so, only they know.