Review of Dits From The Commuter Belt Album by Bromheads Jacket 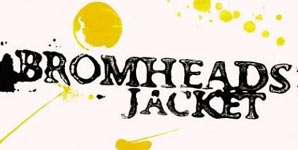 It always makes you a bit wary when there is a lot of hype around a band, the pressure of their ever-growing fan base who once heard a few tracks wanted more, the press then jumped on the band wagon (maybe it's because they are from Sheffield) and wallop here is the debut album of Bromheads Jacket. Too many people think bands will be good just because of their geographical location, let these delusions end RIGHT now, where someone comes from or how they lived their childhood has nothing to do with how well they can play a guitar or write a quality tune. Where will Bromheads Jacket fall in this?

Bromheads Jacket hold so many talents with their English whit, fast punk style guitar mixed with a kind of commentary vocal performance from Tim Hampton. The album is compiled of tales that people will both love and loathe, in some places they can be said to be too close to home. At the same time you can listen and relate to some of your own experiences with a smile.

Bromheads Jacket are a mix between Oasis and Arctic Monkeys without all the commercial stuff around them, musically they are on a par with the pair of these bands but the thing that worries me is that they will not get the same kind of support around them. They certainly deserve that on the evidence of this album. There is no holding back with Orton's Intro that kicks in noise, noise and more noise, this leads onto the first song 'What If + Maybes' which is a continuation of the intro, but with clever spiralling lyrics. This is what the Bromheads are all about guitars blasting out there chords that will make you stand a back, with what can only be described as inspirational stick playing (the drums). One thing that does make this band stand out from the rest is through one song, which is Poppy Bird. This is nothing like anything else on the album, but it just blows you away! A story of a bloke with a disorder who has the courage eventually to talk the girl he fell for on the train. Just because he was a child of a difficult nature, it does not mean that he can't try and lead a normal life. This song alone has you intrigued on what is going to happen at the end. Feel the baseline with Fight Music For The Fight? And again Tim displays a perfect vocal/front man performance. Not forgetting the Pre released Singles Trip To The Golden Arches and Woolley Bridge. Lets face it; it is tracks like this that forced this album out into the record shops.

It is not often that you find an album where every song is as good as the next, and when you come along something as valuable as this, then grab it with both arms keep hold of it and play it until it is knackered. Bromheads Jacket is one of the most exciting bands coming through and this is whom people should be raving about instead of the likes of Mika.