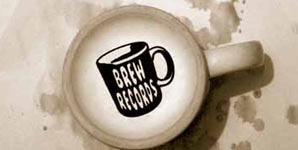 Brew Records fanfares its arrival with a compilation whose tracklist reads something like a who's who of the Leeds guitar music fraternity. Most of the acts included are fairly well embedded into the experimental rock movement currently blooming in West Yorkshire, and those familiar with the aforementioned scene will need no introduction to most bands represented here. Rather than bore the reader and irritate the musicians with ham-fisted attempts to shove them into a 'post-whatever' bracket, it'd be a better use of ink to pick up on the threads that link these bands together.

With only a couple of expections, ambient song-smiths Glissando being one, all the music here is driven by guitars. Whether it's Humanfly's 'Nenhuns deuses nenhuns mestres' whose huge riffs suck in air like jet engines; or Jon Gomm's 'Waterfall', where innovative use of the fretboard conjures up the delicate cascade of, erm, a waterfall; or The Butterfly taking mariachi riffs where they've never been before; the music on this compilation is proof that not only is guitar music alive, but it is mutating into various exciting directions.

The Leeds 'scene' is not a scene in the typical sense of the word, as it doesn't really have a distinctive sound or aesthetic. These bands support each other and play at the same venues, and are all very serious about their music. It is this, as well as a shared belief in what they do, whether or not anyone else agrees, that marks these bands out. Many of them are furiously experimental while managing to retain real musicality. The main achievement of this compilation is highlighting that despite the considerable amount of bandwagon-jumping music-haters Leeds puts up with in her bands, there is a deep well of great, innovative rock music. The other, not inconsiderable achievement, is persuading The Scarman Trust, a national charity for community projects, to partly fund a new indie record label. Nice one boys!