Review of The Sound Inside Album by Breaks Co-Op 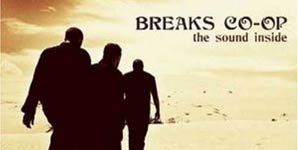 Rich men with fancy toys really shouldn't be allowed out to play with the rest of us-there's always the chance we'll end up liking them...

Trust me. I really wanted to dislike Zane 'The Zipper' Lowe's band's second album 'The Sound Inside', really I did. I wanted to be the kid to spit on him when the others had finished with him and cuss bitterly 'that's for liking Funeral for a Friend Zane, how was this ever going to work?'. Only I can't, I want to go and play in his fancy electric car. I'm not sure how much credit is due to Mr Lowe himself, or to bandmates Hamish Clark and Andy Lovegrove but 'The Sound Inside' is a self-effacingly pleasant coffee table album. It is neither unpleasant not intrusive and elements of it's Elbow meets an easy listening Boards of Canada or Death Cab meets Danger Mouse-lite trippity hop beats are actually quite alluring, without ever being overly exciting. Much of this is down to the dazzling tender vocals of Andy Lovegrove to be honest, particularly on album stand-out 'A Place for You', whispered somewhere between Murray Lightburn and Michael Buble. However, for a man who commits some heinous crimes against music fandom on his radio show Zane Lowe shows surprisingly reserved and well adjusted choices for his own project. True the album is prone to meander into sounding like Crowded House from time to time and just plain meander at others- but I wouldn't be surprised if I hear it at a schmoozy party in the next six months. I honestly never thought I'd say that about a man whose persona is so publicly gregarious, and trust me, I wish I didn't have to, but you pay a price for integrity...