Those already familiar with the debut Boots Electric album Honkey Kong probably debate how Jesse Hughes and co. could possibly transport the funky, largely electronic sound from studio to stage. The answer is simple; turn it into a rock tour. With Hughes at the helm what else would you expect? 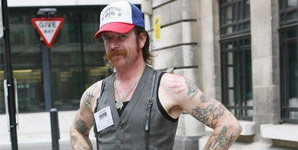 Mixing old with new, Hughes and his Boots Electric cohorts played a set of Honkey Kong tracks with a handful of Eagles of Death Metal classics thrown in for good measure. Boots Electric is a solo venture and when it came time for some Eagles of Death Metal tracks to be played Hughes took this very personally indeed, dismissing the rest of the band so he could man the stage alone to tackle the hits. Taking requests from every corner of the room he effortlessly jammed through such classics as 'Miss Alissa' and 'Wannabe In La' - just one man and his guitar, what more could you ask from a rock show. As demonstrated throughout the set showmanship is a given for Hughes, his lone segment demonstrating this flawlessly. He may not have the respect of all the audience when the group first took to the stage, by the end of it though he couldn't have been more revered.

Calls for the audience to discover, or rediscover in some cases, the 'spirit of romance' did not go unheeded - audience participation becoming more and more unhinged as the show progressed, with sporadic dance numbers on the floor growing with each song. "Looks like we've found the spirit of romance" Hughes boldly states towards the end of the set, the rapturous applause from the crowd does little to contest this. Say what you want about punk and hip-hop, one thing for sure is that rock and roll sure ain't dead as long as Boots Electric are touring.