Review of Boardwalk Album by Boardwalk

There's that really funny scene in 'When Harry Met Sally'; you know, the one where the two of them are sitting in a café somewhere and Meg Ryan starts to fake an orgasm in response to Billy Crystal's line about it never being done to him before. It's not really about men being gullible (although we are), the purpose is to show that the leading characters have a kind of chemistry building, a sort of hormonal time bomb which when it goes off leaves all sorts of mess afterwards. Boys and girls together without that itch are like two positive batteries; full of electricity, but no voltage. 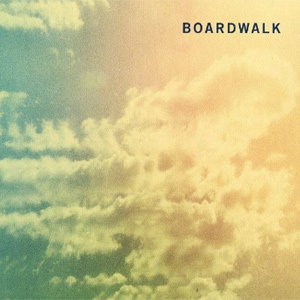 If Boardwalk (LA duo/ reputed couple Amber Quintero and Mike Edge) are grappling with the dynamic of new love and all of its brain-frying implications, their self-titled début album certainly finds them failing to bottle the possibilities. Instead of the urgent pulsing of, well, y'know. the ten songs here are pedestrian, romantic in a dusty, understated way, but not exactly filled with light-headed adrenalin. This unrequited smoulder is despite the obvious qualities of Quintero's voice; a semi classical drawl which, whilst it doesn't have the lurid undertones of Lana Del Rey, still manages to sound a little lived in.

If the duo wrote these songs whilst on honeymoon, you hope that 'Crying' isn't autobiographical; the lonely tambourine and fuzzed out guitar sounding like the whole goddamn thing was over even before it began. Rarely getting above walking pace, the exotically titled 'Keep The Wolf' and 'High Water' both swirl in drifts of reverb, the latter in psychedelic keys and an alt country slide which ultimately isn't as cosmopolitan as its outer darkness would suggest.

There's lots of precedent for this kind of set up of course, other than Gardens of Eden, asps and all that historical stuff, the similar (but not equivalent) detachment of Beach House's tangled dream pop having ultimately dragged them to the well-kept verge of the mainstream. Perhaps instead the duo are trying to recreate the opiate glimmer of Mazzy Star, in recognition of the fact that Hope Sandoval has made a career out of playing the sultry oddball, but only on the more cinematic 'It's Over' do they manage to keep the listener tuned in for more than a few moments at a time. The only real contrast is via the rubbed down traces of Brian Wilson which fleetingly haunt the more animated 'Some Things'. There's no denying that the best type of love can be the one that builds like waves, washing the parties away by crescendo. For Boardwalk, taming this kind of kinetic energy would almost certainly deliver more compelling music than they've produced here.