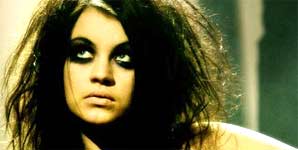 In citing influence from the likes of The Cure, Sex Pistols, Nick Cave and Cyndi Lauper, you would surely be expecting something weird yet wonderfully brash from goth-rock act Betty Curse.

Weirdly brash it might be, but the music of Betty Curse is disappointingly far from being as exciting and as original as that of those who have inspired them and is more a case of pop imitating rock.

The opening lines of Met On The Internet suggest this is going to be an aggressive rant stemming from lead singer and co-writer's Megan Burns' troubled childhood. Indeed such is consistently inherent in the rest of the tracks here but, to be honest, the uninspiring negativity does little to render appeal in the music, unless you're of a similar frame of mind of course. Yet, behind the anger and the pain, Burns' voice actually has a girly kind of joviality which makes wild-child alias Betty Curse even harder for her to pull off as convincing.

Burns scores points at least in succeeding to find a healthy medium in which to vent years of pent up anger but immediately has some taken back off her in reverting to such juvenility in her lyrical style, such as her attempt in using sexually-orientated imagery in Rot In Heaven. But if you want to succeed in the world of grown-up rock, you're going to have start thinking like a grown-up rocker! The attempt at shock-tactics however is sadly no more impressive (or shocking) than something you would expect from Pink, whose similar life experiences and musical traits have earned her worldwide success on a more commercial scale. Perhaps therefore Betty Curse should think about marketing themselves towards a teenage-orientated pop audience as there would seem more of a niche there for this type of music.