Benicassim Festival must be the ideal holiday for music lovers. What better than to combine a beach holiday in a beautiful Spanish resort with a festival of great bands! 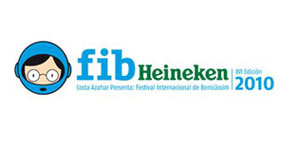 Whether you decide to camp up on the hill or stay in the town, you will inevitably end up on the beach during the day, mulling over the performances of the night before. You'll be surrounded by festival goers from all over Europe and music from the bands performing at this year's festival will be playing from every stereo. The atmosphere, as you would expect is that of a holiday feel and the crowds are friendly and jubilant. In the evening, you head up the hill to the festival site. The concrete stage areas do take a bit of getting used to, it initially feels a bit like having a festival in a car park, but there are plenty of grassy areas to chill out. And one of the major benefits of Benicassim is its size. With three main stages, it's small enough for you to nip between the stages and catch all the bands you want to.

Thursday saw The Kinks legend Ray Davies continued his triumphant festival season with an epic performance on the main Verde stage which included all the classics; Tired Of Waiting For You, Sunny Afternoon and Lola but the biggest cheer came when a member of the crowd threw a glo-stick at the stage and Davis effortlessly caught it in mid air. He was followed by Kasabian who headlined the first night at around 1am. The band played all the old favourites, Fire, Shoot The Runner and Vlad The Impaler to the delight of the crowd.

Friday saw Mumford And Sons play their first Spanish gig to a huge crowd. People clambered up trees and stood on bins and tables to catch a glimpse of the band. They played the majority of their album Sigh No More including, The Cave, Blank White Page and Little Lion Man before announcing 'it turns out Benicassim is the best festival ever'. Playing the main Verde stage on Friday was Julian Casablancas who performed material from his debut solo album Phrazes For The Young as well as a couple of old favourites from the Strokes, leading the crowd to mob him as he left the safety of the stage. Vampire Weekend headlined the night performing to a jubilant crowd. They showcased songs from their new album Contra but it was the likes of Oxford Comma that really got the crowd going. Meanwhile, on the small EastPak Fib stage, Joy Division bass player Peter Hook performed in front of a small but dedicated crowd. Taking lead vocal duties, Hook's energetic performance of Joy Division's cult album Unknown Pleasures was an unusual site but the music was spot on as the emotions of some audience members showed.

Moving into the weekend, Ash jetted in for their early evening performance on the main stage. Performing songs from their record breaking A-Z Singles series, they proved that they have continued to evolve as a band. Classics such as Girl From Mars and Kung Fu sounded all the better in the blazing Spanish sun. Despite the majority of the crowd being English, Ian Brown impressed by communicating completely in Spanish as he performed. On the main Verde stage, The Specials played to a huge crowd who danced through the entire set. The crowd only became more frenetic when dance legends The Prodigy took to the stage. With an impressive light show and their usual energetic performance, they encourage the excited crowd to dance as they drew the night to a sweaty but ecstatic end with Smack My B*tch Up, Fire Starter and Breathe. But among the crowd, the talk of the evening was PiL's John Lydon who managed to alienate his whole band during his performance on the Fiberfib stage.

The closing day of the festival came all too fast, with the Foals showcasing new material and Ellie Goulding triumphantly replacing Lily Allen who was forced to pull out of her main stage slot due to medical reasons. Perhaps the fact that most festival goers were unaware of the replacement until they headed to the stage was a contributing factor to the huge crowd that gathered, but Goulding's performance was more than deserving. On the main stage Dizzee Rascal did his usual trick of whipping the crowd into a dancing frenzy as he belted out party classics, Fix Up, Look Sharp and Bonkers. Closing the festivals main stage were The Gorillaz, looking to improve on their disappointing Glastonbury performance. Damon Albarn and his band mates (The Clash's Mick Jones and Paul Simonon) didn't interact with the crowd much but that didn't seem to matter. Their combination of special guest and video projections seemed to keep the crowd happy.

So next year, if you're looking to add something a bit special to your standard week away in the sun, give Benicassim a try. Four days of the biggest bands around, diverse acts, and all playing through the night in the balmy Spanish weather. It's a music lover's perfect holiday.