Review of Terrah EP by BeatauCue

Well, just as we'd concluded here at Contact Towers that the role of winsome boys making perfect synth-pop had been taken by Years & Years - whose recent 'Y&Y' EP is as close to perfection as it gets - then sacre bleu, if it isn't those French lads BeatauCue hitting back with a trio of tasty techno pop tunes. Or something. 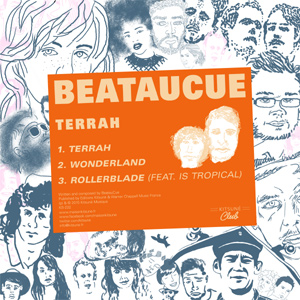 Seriously though, having been around for seemingly years now, Alexis and Mederic have parked the slightly more nuanced beats of their last release 'Kyllan' and this time gone instead straight for Le Jugular. Remixers of Kylie in the past (although, to be fair, we're struggling to think who hasn't), you'd imagine that the duo would've learned a thing or two about making something euphoric for the masses to lap up, and we're pleased to inform you that you're absolutely correct. Whilst it does sound a little like the soundtrack to a soft drink ad, the title track has one of those Ibiza vibes and a huge Mains-in-the-air hook that should make it inescapable this summer, but in a good way.

Not quite as upfront - but we're talking degrees here - 'Wonderland''s solid 4/4 dynamics and rolling pads are still glistery enough to have us swooning, but the real fun comes last as 'Rollerblade' takes us for a spin in their groove-o-copter. Essentially a monster piece of sun-kissed trance that makes the listener feel like a million Euros, there are even words, but thankfully they're just incidental, as a clutch of melody lines spiral off into the sky.

To us, this is the kind of stuff that the Kitsune label which the pair call home revel in - cool, but funky music for dance floors without hang ups. That they sometimes stray from this formula can make them a bit hit and miss, but 'Terrah' is definitely the former, furthering a Gallic disco legacy which guess who began with guess what, guess when. So we say allez then and depeche toi!