Beach Slang's debut album, The Things We Do To Find People Who Feel Like Us, is yet another record that makes me want to jump on a plane and hang out in bars in their hometown of Philadelphia, just to watch local bands rip the roof off the venue. The past few years have seen The War On Drugs, Nothing, Swearin', and Restorations put the city back on the map as a hotbed of musical talent. Beach Slang is certainly the most raucous of those acts, using volume and urgency to propel their Punk Rock through your skull. It ticks all the boxes it should clocking in at just shy of 27 minutes-worth of melodic and cathartic no frills Punk. The relentless sonic punch of these 10 songs almost manages to paper over the cracks, but at its core this is simply a good, rather than great, Punk Rock record. 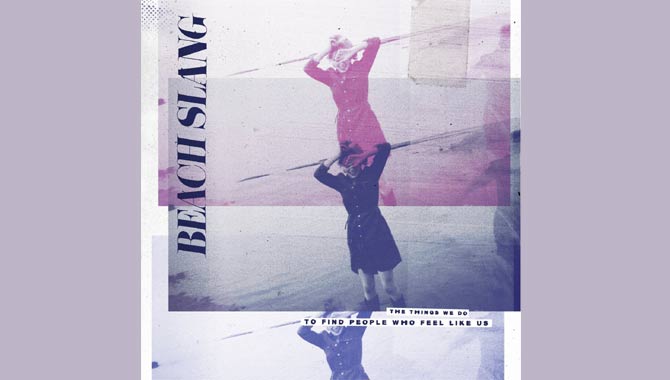 Musically there's no faulting the four-piece band or their song writing. The guitar lines are aggressive and catchy in equal measure, aiming straight for the jugular. The backing vocals add a melodic pop sensibility that the likes of Green Day have been peddling for years, and there's no denying there's something joyous to be found in the adrenaline-fuelled choruses despite the subject matter. The sole moment to catch your breath midway through the album, 'Too Late To Die Young', is as accomplished as any Replacements song that bears the same hallmarks of acoustic guitar and piano. Judged on the musicianship alone the album would sit among the greats.

From The Clash onwards Punk Rock has always had a social conscience and something to rail against: unemployment, prejudice, or even war. There's always been something quite specific that's motivated and mobilised those involved to vent their frustration. Aside from a general Generation-X or post-millennial youthful dissatisfaction with the world, I'm not sure that singer and guitarist James Alex has anything specific on his laundry list of complaints. Yes it's a feeling we can all empathise with, but I'd really like to know what's got him so riled up. On 'Dirty Lights' he sings: "We're the kids that won't do what we're told", which is fine, but it comes across as a bit of a Rock N'Roll cliché if you don't know why.

That's in fact my biggest issue here. Some of the lyrics feel designed to paint a portrait of outcasts without really giving any depth or characterisation to their predicaments. For example Alex growls the line "too f**ked up to love, too soft to hate" on 'Bad Art & Weirdo Ideas', before later concluding "we're allowed to be alive". It's undeniably a positive message for the disenfranchised, but it feels like Alex is only documenting the symptoms, rather than diagnosing the problem. While I welcome the sentiment, the execution feels observational rather than confrontational. That in turn makes some of the best lyrics across the record sound hollow and clichéd, when they could in fact have been revelatory in a different context.

Maybe I'm picking holes where I shouldn't be, if you sit back and take in the whole experience The Things We Do To Find People Who Feel Like Us works well as a nuts and bolts Punk Rock record with a sense of catharsis for a whole generation. But even the title alone seems to promise more than that, which means there's a sense of a missed opportunity amongst this glorious noise.