There are so many brilliant British rock bands around at the moment for us to be proud of. From festival headlining arena rock behemoths (Biffy Clyro) down to independent, DIY cottage industries (Black Honey, The Vryll Society, Dinosaur Pile-Up), as a country we are spitting out a diverse mix of high quality guitar wielding talent. 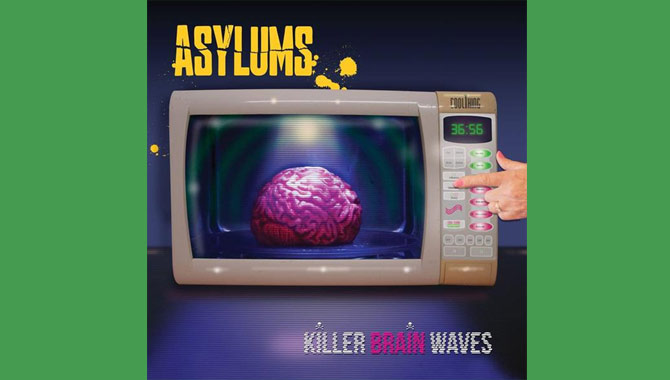 Asylums are yet another ace British band building a buzz by pumping out anthem after anthem. After about 18 months of teasing with 6 singles being released, finally they are releasing their debut album, Killer Brain Waves; a mind blowing document of a band brimming with confidence and unbelievable song writing chops.

The album kicks off with a rumbling intro, before the scuzz-laden snarl of Second Class Sex opens the album to great effect. Spiky riffs sit comfortably with sing along choruses, creating something not a million miles away from 90s Britrock goons 3 Colours Red. With no let up, the similarly raucous I've Seen Your Face In A Music Magazine keeps things in motion with more hooks than a fishing convention. This thing slays.

Next up is the single Joy In A Small Wage, a bitter sweet slice of pop rock which Ash would probably kill to have as a single these days. The lyrics on this tune, and later cut Necessary Appliances are worth a mention; here is a band with something to say. Necessary Appliances in particular speaks about 'an intravenous coffee machine' which 'feeds us caffeine' before making the admission that 'austerity will rule our lives'. These guys are clearly discontent but still manage to marry this to ace punk riffing and anthemic choruses.

Musically, the album treads a line between Britpop and grunge with influences from Elastica, Nirvana, Weezer and Feeder which still sounds pretty fresh as Asylums put their own individual spin on things. Album highlights include the 86 second of joyous aggression that is The Death of Television, the slightly baggy Sunday Commuters and the magnificent Missing Persons with its soaring, lengthy outro.

There are a couple of issues with Killer Brain Waves, however. At just under 40 minutes, there just isn't enough of it. The second - and most major - issue here is that if you've been following Asylums for any length of time, you've already heard 6 of the album's 12 songs, meaning there is really only about 15 to 20 minutes of new music on offer here, which is pretty weak.

Nevertheless, Killer Brain Waves is an amazing collection of songs, and Asylums have put together something really special here. Hopefully it won't be too long until tey put out some more tunes.