Review of Here and Now Album by America 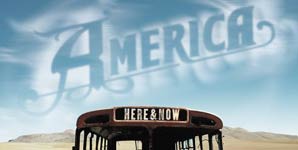 Don't, for one minute, get wrapped up in the emotion of a new album by the band who made Horse With No Name and Ventura Highway 30 years ago. Solely redeemed by the included disc of their hits played live, the 12 new songs are awful enough to make you check the cover to check it is, indeed, the right band, and not some bargain-bin boy band from Basingstoke. The strange thing is just how many modern musicians lent their 'talents' to producing or playing on this album - from Fountains of Wayne's Adam Schelesinger and Smashing Pumpkins' James Iha's production, to Ryan Adams, My Morning Jacket, Nada Surf, there really are all of the ingredients to make this work.

However, despite the press release hype, Dewey Bunnell and Gerry Beckley clearly spent too long out of the rain in that desert - the songs are weedy sub-Magic Numbers nonsense, their voices sound weak and thin. The harmonies occasionally remind of the America of old, but there isn't a song here that would have made it to their debut album. Avoid, unless you're really keen on Rainbow's Geoffrey and Bungle covering Westlife.