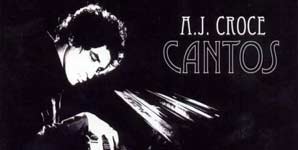 Something of a singer-songwriter's singer-songwriter, and a remarkably versatile musician, A.J. Croce has appeared on stage with artists as stellar as Aretha Franklin, James Brown, Santana, Dave Matthews, Ben Harper, Rod Stewart, B.B. King, Lenny Kravitz, Bruce Hornsby, and his childhood hero Ray Charles. Cantos is his sixth album, and follows a career in which his first five all hit the American radio charts in a different genre, from blues, to jazz to Americana and Adult Alternative.

This is songwriting that you wish Paul McCartney or Elvis Costello was still able to produce, and puts Croce up there with artists like Michael Penn and Ray Davies, with a great, clear voice (think Ben Folds, or McCartney in his younger days), and an easy instrumental style. Cantos immediately puts artists like Brendan Benson back in the 'average to good' box, and reveals the one-dimensionality of others, like James Morrison. Ultimately, Cantos never strays from a pretty safe place in the middle of the road, but is healthily unapologetic for that.