The Aeroplanes - This Is My Love Single Review

Review of This Is My Love Single by The Aeroplanes

The Aeroplanes
This Is My Love
White Noise
Single Review 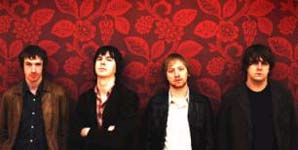 Having formed in 2003 on the outskirts of Liverpool, The Aeroplanes signed their record deal a couple of years later, and are now preparing for the release of their debut album. They've just returned from playing SXSW, and are to be featured on the soundtrack of Jeff Bridges flick "The Moguls" later this year,

When thinking of aeroplane noise, surely one of the first connotations that spring to mind is that they're really loud. Which is quite baffling when listening to The Aeroplanes, as they're another of the spawn of Coldplay. "This Is My Love" is particularly reminiscent of Chris Martin's earlier indie work, one of those slow-burning anthems that we've all heard a hundred times. Showing a bit more patience, "Just A Girl" is a decent acoustic ballad in the country genre, but it's far from special.