Review of Supersonic Album by Adventures 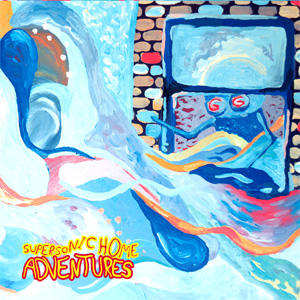 Code Orange signed to Deathwish Inc. in early 2012, the same year Adventures released their self-titled EP. During that year, members of these bands were an average age of 18. Since then, Adventures have released two more EPs and Code Orange have put out two full lengths which have both been met with critical acclaim.

For their new record, Adventures enlisted renowned producer Will Yipp (Tigers Jaw, Keane, Whirr, Title Fight). Yip's influence has frequently been known to see bands develop their sound -La Dispute and Pianos Become The Teeth both took large steps out of their comfort zone on their recent records with him and it looks like Adventures too have expanded from their lo-fi, 11 minute long EPs.

On their shorter releases, Adventures sound a lot sparser. Songs would slug into climaxes, slow to a soft pace and bound back again. On 'Supersonic Home', Adventures play with a unique melodic quality through use of interplay between the musicians, suddenly a strong part of their sound; when vocalists Reba and Joe come together on tracks like 'Walk You To Bed' and 'Long Hair', the result is quite compelling. There are moments on here when this interplay lifts the songs from simply being catchy, punk-driven indie tracks and demonstrates both their skill as musicians and their great chemistry.

About a month ago Run For Cover Records released a video for 'Supersonic Home''s lead single 'Heavenly'. On it, Adventures show that they can be both punchy and heartfelt. Singers Reba and Kimi harmonise, "Slow down and see the green/ there's much more here to see than you think", and warm guitars and the fervent chanting of "He's a swarm, he's a swarm, he's a swarm"  sees out the track.

Adventures are still just as emotionally-driven as their earlier releases, although now their tracks are both fuller and catchier. 'Marble Home' and 'Your Sweetness' are examples of where Adventures can get stuck into some sad subjects and still seem to be having a lot of fun playing them.  This is something that has proved quite difficult for other bands that have emerged to have a crack at reworking that 90s sound.

There are many very charming moments on this album. 'Supersonic Home' sees a departure from Adventures' lo-fi sound and instead demonstrates their strong musical chemistry in a more full-band kind of style.

'Supersonic Home' is available to buy now and can be streamed below.