Produced and recorded in a home studio in El Paso, Texas, ADD Agency's new album, Gemstone Radar, was mastered at the famed Abbey Road Studios in London.  ADD Agency is Will Mora, who plays guitars, bass, keyboards and drums, along with performing all the vocals. 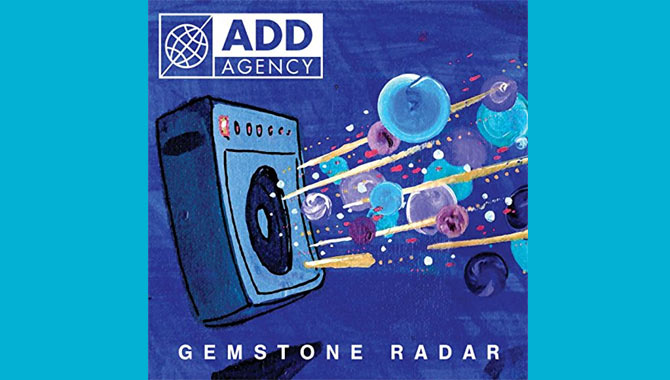 Mora does not look like an alternative rock musician or any kind of musician, for that matter. He sports a two hundred dollar haircut, a custom-tailored suit and a tie.  In other words, he looks like "a suit", one those venture capitalists who run around making oodles of money, using other people's money and talent, or maybe a quant.  Nevertheless, he is a musician and quite good.

ADD Agency's sound is nouveau-retro-1980s electro-pop, with influences from Devo, David Bowie and Michael Jackson.  And every now and then, listeners might think they're hearing traces of The Tubes, but without the rock 'em sock 'em punch you might usually associate with The Tubes.

Gemstone Radar consists of eleven tracks and, frankly, three or four of them exhibit all the mediocrity of white bread. 'Motivation', 'Mermaid of White Sage', and 'Fame' are songs that, ultimately, provide little more than consternation about their inclusion on what, for the most part, is a decent album.

The first track, 'Bootypop', is aptly titled.  It is bubble gum electro-pop dance music, replete with gushy-whispery vocals.  And actually, although the previous description sounds really bad, it's fairly good; except, of course, for the robotic synthesizer solo, which simply doesn't fit. 'On the Side', for all intents and purposes, is David Bowie does Michael Jackson's 'Beat It'.  Mora's voice is the spitting imitation of Bowie, up to and including the Brit's distinctive, stilted cadence, while the guitars, the beat and the melody sound like a futuristic clone of Jackson's more famous tune. And surprisingly, it works.

'Set Me Free', Mora does more of the same, only this time around the vocals resemble Michael Jackson's hiccuppy huskiness, whereas the bombastic beat and melody sound like Nine Inch Nails performing electro-pop. 'Don't Shake the Boat' is another Michael Jackson beat, which means the beat is contagious, along with vocals from the Mickey Mouse Club of the 1960s.

Mora's David Bowie imitation appears once again on 'Sky Don't Fall', which is sustained by a tinny beat and a mystical chorus.  'Secret Agent Man', has no relation to the famous song by Johnny Rivers.  Too bad, because Mora's tune falls a little flat; it's too compromising, as if he couldn't commit to it.  'Paint It Black' is Mora's cover of the great Stones' song. Mora electrocutes the song with his electro-pop overcompensation and Bowie-like voice. The last song on the album, 'Cola', is one of the highlights of the album. The lyrics appear to give homage to Coca-Cola, while the beat fuses funk and electro-dance, with pleasant effect.

Gemstone Radar, even with the mimicry and electro-pop ambience, provides an honest listening experience. On the one hand, it's definitely bizarre; on the other hand, the bizarreness is decorative rather than pejorative.  And Mora does keep the weirdness at acceptable levels, which makes Gemstone Radar strangely attractive.