Review of Zampano Album by 747s 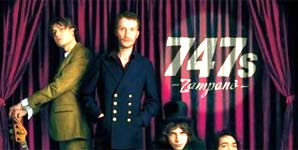 747s were the band asked by Alex Turner personally to collaborate on an Arctic Monkeys b-side for 'Leave Before The Lights Come On' and the band to have snatched some of the most important touring support slots around, not least with The Kooks and soon Jet.

'Zampano' was the name of a travelling circus strongman in the Oscar winning French film La Strada. There are whiffs of a concept album to most music that undertakes an alternate persona as Zampano does, but the avant-garde 1920s style this album adopts fails to fall flat on its face. Songs that could compliment Salvador Dali films or play at a Victorian Circus coexist surreally with ones that ooze the modern grime of The Clash or shiny modern pop.

747s are very much a tongue-in-cheek experience; 'Miles Away' is almost a daring wink to the listener to take such a stereotypical sound of a by-gone era seriously. 'Nature's Alibi' and 'Goodbye For A While' are similarly enriched with theatrical imagery using familiar piano melodies as a

comfort blanket to increase the element of surprise before the band drift into an unexpected guitar solo or cabaret. Album highlight 'The Return' simply withdraws from its jaunty rhythm like some sort of musical drama queen into a shell of delicate and abstract blues.

The thick satires of times, pictures, culture, atmosphere make for psychedelic listening that, as sensationalist as it sounds, has never really been tried before. Without the past eight decades of popular entertainment 747s could never have made this album, and by the end of the 14 tracks you're still asking what exactly they're all about. Judging by their debut the fun is in keeping us guessing.