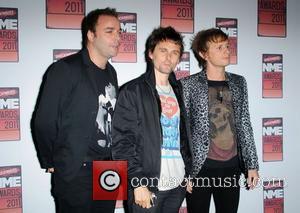 U2 and Muse thrilled music fans in Brazil on Wednesday night (13Apr11) by wrapping up their South American tour with an after-hours concert in a tiny club.
The bands took to the stage at Sao Paulo nightclub Bar Secreto and performed a set of hits and covers.
Among the highlights were Bono's rendition of Talking Heads' Psycho Killer with Larry Mullen Jr. and Muse's Dom Howard on drums and guitarist The Edge's cover of Let's Dance.
Even Mullen Jr. took to the microphone for a version of classic Irish drinking song The Wild Rover.