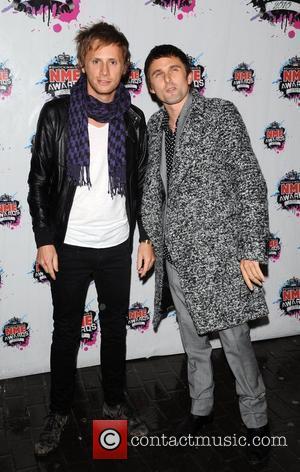 A song by Muse has been removed from the forthcoming THE TWILIGHT SAGA: ECLIPSE soundtrack - but the rockers are adamant the vampire book's author Stephenie Meyer is not to blame for the decision.
The British band has contributed songs to the first two Twilight films, and even credited the franchise with introducing their music to a new teen audience.
A third track, which was to be featured in the upcoming Eclipse film, has now been pulled from the soundtrack - but the trio insist they are not angry with Meyer.
Drummer Dominic Howard tells MTV, "It's nothing to do with Stephenie; she's totally cool. It's the people in the movie business, completely outside of the writers and the creative types. The non-creative types, I suppose, are the people who are quite hard to deal with in Hollywood, so it didn't work out."
But the group still plans to release the untitled love song.
Howard adds, "We sure will (release it). I mean, it was great. We worked on it in Australia, we were ready to record, we were going to do some recording with (producer) Butch Vig, so we might still do it. I'm sure the song will definitely come to life for real at some point, but I think for this film it's not going to happen."