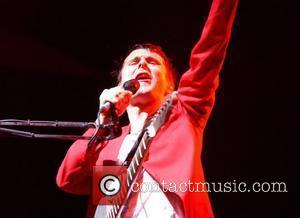 Rock trio Muse have cancelled a concert in Italy after one of the band's parents died on site at Britain's Glastonbury Festival.

Drummer Dominic Howard's father tragically passed away shortly after the band's performance today (28JUN04) - at the annual music bash in south-west England - forcing the band to drop their gig in Bergamo on Wednesday (30JUN04).

The English group's spokesman says, "It is with great sadness that we must announce that Mr BILL HOWARD, father of Muse drummer Dominic, died earlier today at the Glastonbury Festival, a short time after the band's headlining set.

"Mr Howard collapsed on site at 1.15am (BST) and died shortly after. Avon and Somerset Police are not treating the death as suspicious. "In this dreadfully difficult time, we request that the privacy of Dom's family and friends is respected. Our sincere and heartfelt sympathy extends to Dominic and the Howard family."