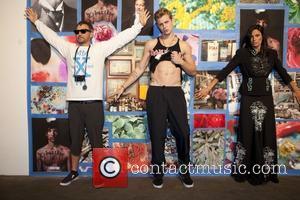 Muse rocker Chris Wolstenholme was left terrified when he stepped up to take Matt Bellamy's place as frontman at a gig earlier this month (Sep12).

The 33 year old threw himself into studio sessions for the group's latest album, The 2nd Law, after conquering his battle with alcohol - and as a result he landed vocals on two of the tracks.

Wolstenholme took over lead singer duties during one show in Cologne, Germany, and the musician admits it was hard to adjust to his time in the limelight.

He tells Britain's The Sun, "After five albums of one songwriter, suddenly the roles changed for those songs. It was hard having to take the lead a little more.

"I've done it once in Cologne. And I was so f**king scared! Afterwards, Matt said, 'Now you know how I've felt for the previous 13 years!' Most people start their singing career playing in pubs to nobody - or at best to 50 or 60 people. Unfortunately I've decided to do it in front of tens and thousands of people with my soul on display to the whole world."