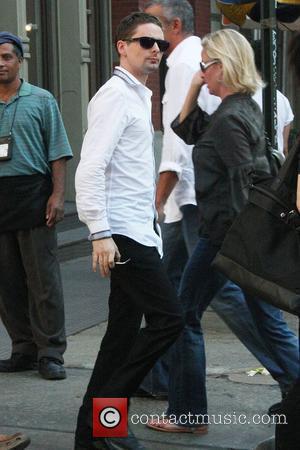 Muse rocker Matt Bellamy has confirmed he is dating Hollywood beauty Kate Hudson - and is "nervous" ahead of an imminent meeting with the actress' mum Goldie Hawn.
Hudson, who has been single since splitting from baseball star Alex Rodriguez late last year (09), sparked rumours she is in a new relationship with the musician after the pair was spotted enjoying an intimate date in May (10).
Gossip reached fever pitch after the How To Lose A Guy In 10 Days stunner supported Bellamy during his band's slot at British music festival Glastonbury last weekend (26/27Jun10).
Now the rocker has admitted they are a couple, and Hudson has arranged a date for the star to meet her legendary mum later this month (Jul10).
He tells Britain's The Sun, "I'm meeting her (Hawn) next week... I'm already nervous. I don't want to make the whole experience even more embarrassing.
"She's (Hudson) great. Everything is going very well. We are really happy and enjoying spending time with each other. She had a great time at Glastonbury."
The star even hints they may wed: "Ask me again about marriage in a couple of months."