Review of The Resistance Album by Muse 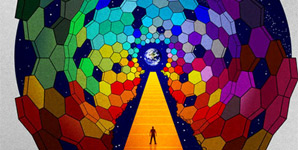 Originally labelled as a Radiohead-copy act, Devon trio Muse found themselves fully accepted as mainstream artists on the back of their 2006 release 'Black Holes & Revelations'. It culminated in two sold out shows at Wembley Stadium and mass critical acclaim, leading to much anticipation for this, their fifth studio record.

The obvious remark about opening track 'Uprising' is that it is Goldfrapp-style take on the Dr. Who theme tune, but that sounds incredibly poor which this song certainly isn't. Appropriately named, it is a rousing call to arms and leads into another invigorating number, 'Resistance', which is a passionate anthem of forbidden love. From blistering rock the album moves to a more delicate and classical nature in the shape of 'Undisclosed Desires' and then unveiled is 'United States Of Eurasia'. Laced with ideas from George Orwell's literary classic '1984', it is a grand and ambitious notion of a superstate coming together and falling apart. Piano and strings mix, throw in Queen-esque theatrics and a sample of Chopin, and this is the mind-blowing result.

Such quality would leave most albums on a downward slope, but for Muse it is just another step in their brilliant musical madness. 'Guiding Light' is beautiful optimism, while 'Unnatural Selection' is full of riotous aggression that encourages fist pumping in line with Matt Bellamy's obvious displeasure with current affairs. So how does a band, who is never afraid to try something different, conclude a release of such grand ideas? In this case, it is with a three-part symphony entitled 'Exogenesis'. Featuring very little in the way of vocals, the first segments is a gripping orchestral crescendo that very much gives the mood of a climax, before leading into a sombre piano piece and then finally a soothing conclusion on which Bellamy croons 'Let's start over.' It's a stunning way to end a record that fulfils the expectation of the band to continually experiment and progress. Their ambition shines through and one can only hope the trio continue to make such enjoyable music.