It is testament to Muse's standing that sold out stadium concerts come as standard, as is the case for this and two nights at Wembley, as well as having headlined Glastonbury earlier in the summer. Last year's fifth studio album, 'The Resistance', hit number one in 15 territories and will see them touring globally until the turn of the year. 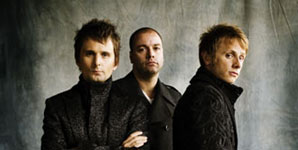 The last decade has seen Muse awarded countless number of best live act trophies and central to this is the innovation of the show surrounding their music. Today we are presented with a structure resembling an office block, with the corner of the building aiming down the middle of the audience. The windows double as giant video screens, and whilst not as impressive as the set up for last year's arena shows, the design does mean that those to the sides of the stage still get a brilliant view as the sides of the 'building' angle away. Kudos are deserved and many could learn from this.

Once the band hit the stage it is also clear that no expense has been spared on the PA system, as they sound crisp through the opening onslaught of 'Uprising', 'Supermassive Black Hole' and a thrilling 'New Born'. Clearly masters of their instruments, the standard of playing does not drop during the course of the following two hours. What does fall into decline however is the momentum of the show, as 'Map Of The Problematique' and 'Guiding Star' slow things a little too much before the sure-fire 'Hysteria' once again jacks up the energy levels. 'Citizen Erased' and 'United States Of Eurasia' prove popular and the band take to an extravagant 'B Stage' which sees them lifted above the crowd on a disc with flashing lights resembling a UFO. Two encores are served which include 'Stockhom Syndrome, 'Plug In Baby' and 'Knights Of Cydonia', an impressive way to more than satisfy most of the audience's appetites, but the complete disregard for material from their debut album is noteable and disappointing. Having watch Muse a number of times before, it must be said the awe-inspiring moments were lacking, the set didn't quite reach the high this extremely proficient band generally manage to achieve. Still, they remain an enjoyable live prospect and will better most gigs put on this year.