The Road Rubs Off On Mumford And Sons

Mumford And Sons say ''the road has rubbed off'' onto their new album, and it is ''full of aliveness.'' 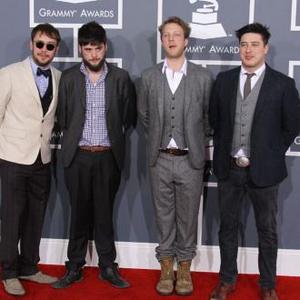 Mumford And Sons say ''the road has rubbed off'' onto their new album.

'The Cave' group release 'Babel' on September 25 after three years touring in support of debut, 'Sigh No More', and some of the album is inspired by them being away from their families and loved ones for so long .

Bass player Ted Dwane told Rolling Stone magazine: ''We're all in relationships in London, and it's hard to be away from our families. But for us, this is an absolute dream come true.

''The road has rubbed off into the album. It's full of aliveness.

''Being away so much for the last couple of years is inevitably a theme on the record. Because it's something that we've all shared.''

While producer Marcus Dravs says the album has ''a slight flavor of darkness on a couple songs,'' musically it picks up where the band left off.

Ted added: ''The ingredients are very much the same: the four core instruments and a lack of a drummer, which can give it that strange, simple, unique sort of sound.''

Marcus added: ''I don't think we were looking to be too crazy and experimental. The idea was always 'If it ain't broke, why fix it?'''

The band also think the album is ''more collaborative'' than their first effort.

They said in a statement: ''As a band, we've never been closer or more collaborative, all working to our strengths. And so we feel that this record is a natural progression that we're proud of, and we cannot wait to take it out on the road.''

Mumford and Sons will be touring the US from August.

'Whispers in the Dark'

'Ghosts That We Knew'

'Lover of the Light