Review of Babel Album by Mumford And Sons

It would be understandable if Marcus Mumford had approached the prospect of Mumford & Sons' second album with some trepidation. Many bands which have experienced a similar meteoric rise into the public consciousness over a short period of time have faltered with their sophomore effort. Babel almost sidesteps this issue by re-treading old ground and, in the process, cements the band's sound and status. In short, no one else sounds quite like Mumford & Sons, and Babel is a celebration of that fact. 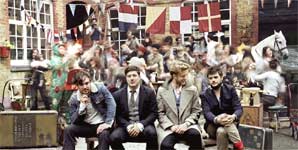 Admittedly, one of the traps the band has avoided is having to craft a new set of songs at short notice. Much of Babel is based on material that's been road-tested over the last 18 months; some of it even dates back to the creation of multi-platinum selling debut Sigh No More. So, in the knowledge that the songs had some kind of pedigree, the band entered the studio and has produced an album that refines their sound. It maintains the elements that made them figureheads of a media-fuelled folk rock movement, while (as the title suggests) infusing an undercurrent of biblical imagery into their repertoire.

It's that thematic subtlety that really does make the album a rewarding experience. Whether it's the almost hymn-like mid section of first single 'I Will Wait' which builds to a joyous crescendo of brass, guitars and banjo, or the accompanying lyrics ('Raise my hands, paint my spirit gold'), there's a sense that the decadence and biblical wrath implied by the title are lurking somewhere close by on most tracks. 'Holland Road', meanwhile, mines a deep vein of despair ('And I will not tell, the thoughts of hell, that carry me home, from the Holland Road'), while an almost funereal drumbeat provides a sombre undertone.

For an album that has a preoccupation with mortality ('Below My Feet'), death, and the afterlife (The chorus of 'Lovers Eyes' is one such example: 'Tame the ghosts in my head, that run wild and wish me dead'), it's a surprisingly upbeat affair. Despite its many layers of introspection, at its heart Babel is an album about love. Many of the songs here build to barnstorming choruses, and while Mumford has flashes of anger to vent ('Broken Crown'), his vocal delivery has a warmth and tenderness that seeps into every crevice of the record.

With no shortage of memorable songs, catchy melodies, and reasons to buy a banjo, Babel succeeds on pretty much every level. It's a complex record, and all the more rewarding for being so. The very definite choice to not evolve the Mumford & Sons sound may draw criticism from some quarters, but when you've discovered a winning formula, is there really any need to re-invent the wheel?