A decade ago Colin MacIntyre a.k.a. Mull Historical Society was opening for The Strokes on their inaugural UK tour. At the time cited as a possible "next big thing", heavy MTV2 rotation and a couple of minor hit singles followed, and then as with so many artists burdened by the weight of expectation the short ride back to obscurity ensued. Despite the contrasting fortunes between Mull Historical Society and his former tour buddies Casablancas et al, it didn't stop MacIntyre from continuing to make music under both his own and the Mull Historical Society monikers. 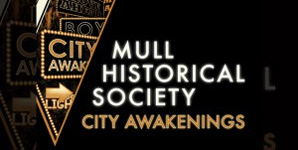 Having released the first three Mull Historical Society albums in as many years at the turn of the century, MacIntyre briefly abandoned the guise for his last two records. 2008's 'Water' and its successor a year later 'Island' having both been issued under his own name, MacIntyre preferring a more stripped back approach than the quirky, unconventional stylings associated with past Mull Historical Society releases. Nevertheless, having gone back to the drawing board armed with a vast collection of sketches and ideas, MacIntyre came back with a batch of songs that seemed to have more in common with his earlier recordings and while 'City Awakenings' marks his sixth collection of songs in total, the fourth Mull Historical Society record was borne. Confused yet? Well don't be.

Able to call on a loyal fanbase throughout the creative process; indeed if it wasn't for their financial support via the excellent Pledge Music service, 'City Awakenings' might never have seen the light of day; MacIntyre's wares caught the eyes and ears of independent outlet, Xtra Mile Recordings, a label normally associated with hardcore and screamo artists.

Produced by Dom Morley, whose previous credits include Amy Winehouse's 'Back To Black' and Mark Ronson's 'Version', 'City Awakenings' is a record that aims straight for the strictly pop inscribed jugular via a couple of unpredictable excursions into more electronic based territories. While there's nothing here that resonates with the simplistic beauty of 'Animal Cannabus' or 'Watching Xanadu', 'City Awakenings' is a record that suggests Colin MacIntyre may yet take over from The Lightning Seeds' Ian Broudie as the master of understated pop.

The dramatic 'Must You Make Eyes At Me Now' and uncomplicated minimalism seeping through 'Can You Let Her Know' serve as timely reminders of MacIntyre's distinctive craft. Likewise the slow building 'Fold Out City', MacIntyre declaring "I need a city dream with Fairy Liquid beams" and engaging nursery rhyme 'The Lights' - where Starship's 'We Built This City' finds itself namechecked - suggests there's still a hint of the youthful innocence in his songwriting that made him such a captivating prospect all those years ago.

Its on the unconventional distorted electronica of 'You Can Get Better' and Jim Noir style retro folk 'Honey Pie' that MacIntyre and 'City Awakenings' really comes into its own. 'For Bas, The Hague' even regales a touch of The Killers 'All These Things That I've Done' in its coda, its creator insisting "You've got the love song I always wanted" as the song plays out.

While unlikely to propel Colin MacIntyre and Mull Historical Society to the dizzy heights of stardom debut long player 'Loss' promised back in 2001, 'City Awakenings' is a welcome return to form that could easily have been renamed with the more appropriate titles of 'If Only.' or 'What Might Have Been.'

Mull Historical Society - Am I Wrong