New York duo Ms Mr will no doubt be extending their fanbase at Bonnaroo, Firefly Music Festival and Big Guava Festival this year.

Some bands are worth getting excited about and, with the festival season well under way, we're keeping an eye out on the most innovative new arrivals - and New York-based duo MS MR certainly fit the criteria.

The alt-pop twosome have already been wowing crowds with their appearances at SXSW back in March and Coachella this month; the latter of which they will be embarking on again soon for the festival's second weekend; and they are due to continue throughout the year. June sees a busy month for Ms Mr (pronounced Miz Mister) with Bonnaroo in Manchester, Tennessee alongside artists such as Rudimental, Ty Segall, Sam Smith and Jake Bugg, before they then hit up Delaware for the equally sensational Firefly Music Festival. 'In a club setting, you can sort of see everyone; you know they're your fans and it's really exciting to see people sing along with you', MS MR's male half Max Hershenow explained in an interview. 'But then on a festival stage, you get to play this way bigger stage than you normally play, there's way more people there than would ever come to your normal show. So we treat it as a chance to win over the crowd.'

Joining Max in the band is vocalist Lizzy Plapinger, whose musical beginnings were more in the way of a back seat involvement having foundered the independent record label Neon Gold Records while she and Max were at Vassar College. Max was making music with another artist which drew Lizzy's attention, and eventually he got in contact after briefly training to be a dancer at the Martha Graham School of Modern Dance. 'He really thought he wanted to be a dancer but really he missed making music', Lizzy says. 'Then we got together a few months later.' Max reveals that they 'clicked' as a duo and subsequently put out their 'Candy Bar Creep Show' EP in 2012 which included their acclaimed first single 'Hurricane'; a track that really captures the funky, vintage vibe of MS MR and which combines Lizzy's effortless, haunting vocals with minimalist instrumentation.

Last year, they unveiled their debut album 'Secondhand Rapture' through IAMSOUND and Columbia Records, which features all the songs on the EP including their second ever single 'Fantasy', which is a soulful number with a powerful message, and 'Think Of You' which feels more guitar-based but still has that same driving beat that makes these guys special.

MS MR have been likened to artists such as Florence + The Machine and Lana Del Rey, but in truth they are difficult to firmly pigeonhole. That's just the reason why we are so looking forward to them hitting the road in the US over the next few weeks and throughout June where they will be performing alongside Haim, Grouplove and The Preatures. 'I think performing is something we absolutely adore and we're both natural performers and are used to being on the stage in some capacity', Lizzy muses. And back to festivals, May will see them at Big Guava Festival in Florida (where they will re-unite with Haim and Grouplove) and they will also be doing Celebrate Brooklyn! at Prospect Park in June where they will support The National. For those of you who have already bought and enjoyed the 'Secondhand Rapture' album, the duo have recently released their remix EP 'Secondhand^2' earlier this month - so make sure you take a listen.

Watch the video for 'Fantasy: 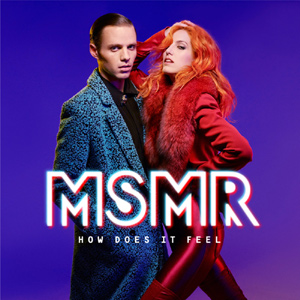