Mr. Tom's debut single, Feet Hit The Floor, was released on March 17th, 2012. The band are currently on a UK tour, which will continue throughout the rest of March; April and May, followed by two dates in Perranporth, Cornwall in July.

The video for Feet Hit The Floor was directed by Zac Moss and sees the band performing in a greenhouse.

Mr. Tom are Nick Crowe (vocals); Steve Colver (lead guitar); Dom Andrews (bass) and Leeroy Marcer (drums). Nick and Dom met through mutual friends at a house party. Steve soon became friends with the duo and Leeroy completed the band, following his studies at the Academy of Music and Sound in Southampton. The band has recently worked with producer James Kenosha, who has already worked with the likes of Pulled Apart By Horses; Dinosaur Pile-Up; Grammatics and Dry The River.

Mr. Tom are well known for handing out vodka jelly shots upon arrival to one of their live shows. 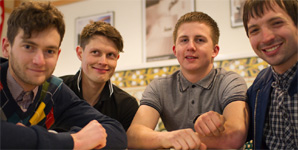