By Sophie Brannon in Music Reviews on 20 November 2015

If you're a pop-punk fan, then there's no doubt that you'll have heard of Motion City Soundtrack. With a career that has spanned nearly two decades, these pop-punk masters released their sixth studio album Panic Stations. The album was a concoction which began on the band's tour in the summer of 2013 and was recorded live. Panic Stations began as a 'writing new material for fun scenario', which perhaps leads to the album being the most inconsistent of the discography.

This doesn't mean that this is wildly different from anything Motion City Soundtrack have produced before. All of the key elements within the album are still there and as distinct as ever. But there seems to be no purpose behind the album, other than a spur of the moment idea. Justin Pierre's quirky lyric-writing is often what brings a Motion City Soundtrack to the top of its game, but this is simply not the case with Panic Stations. For example, Lose Control's chorus is essentially just a repetition of 'woah, it's time to lose control'.

Nevertheless, it's not all doom and gloom for the album. The opening track of the album Anything At All is an energetic burst of sound which is typical of a Motion City Soundtrack album. Days Will Run Away and Heavy Boots are the album's saving grace and attempt to prove that Motion City Soundtrack are still the same band with the same musical power. It's A Pleasure To Meet You is somewhat familiar which will please fans of the band. Days Will Run Away is the most heartfelt track on the album and is possibly one of the most reflective and mature songs the band has ever written.

Formed in 1997, Motion City Soundtrack's forth album and major label debut sees them once again working with Blink 182's Mark Hoppus. To promote this release they'll be playing a handful of shows around the UK at the end of March, before returning to home shores for a large scale tour of North America. 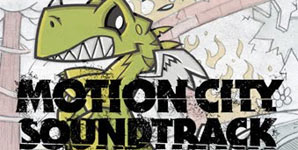