Morrissey - The Youngest Was The Most Loved Video 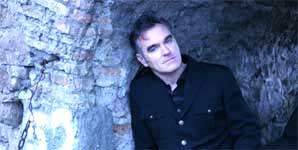 Artist: Morrissey
Song title: The Youngest Was The Most Loved

Morrissey
'The Youngest Was The Most Loved'
Video

Throughout our acquaintance with Morrissey he has turned up simple phrases that eloquently express complex ideas, resonating beyond the mere language as universal truths delivered from this unlikeliest of oracles. In this it is fair to say Morrissey is unique in modern music and, in speaking to us about our lives at the same time as singing his own, he gives us real reason to love him as much as we do.

So when, during 'The Youngest Was The Most Loved', Morrissey sings, "there is no such thing in life as normal", we shouldn't be surprised that this, on first look, near-glib observation comes with an undertow of meaning that makes you question the assumptions you make every day about the nature of people, their relationships, what is and is not acceptable within the family and the world.

On its own the lyric stands as one of the great Morrissey moments, but in the context of a song about the early life of a sociopathic killer, it takes on shades and nuances that make it so much more, standing as a kind of pop bookend to Gordon Burns' chilling 'Happy Like Murderers'. Add to this the fact that, as the song progresses, the line is intoned by a queasy, lurching choir of children's voices, and the song becomes a masterpiece of the edgiest pop music of this or any era.

A characteristically paradoxical bright, breezy, brilliant 2'59" of chart-bound glory, 'The Youngest Was the Most Loved' shows Morrissey fully restored to the height of his powers. Only Morrissey can do this. What a single! Whadda guy!

'The Youngest Was The Most Loved' is due for release on June 5th.

Morrissey - I Bury the Living...

Morrissey, The Youngest Was The Most...