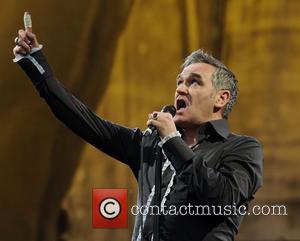 British rocker Morrissey has risked enraging huge swathes of supporters after performing at a concert wearing an obscene T-shirt declaring war on a popular fan website.
The former The Smiths frontman took to the stage in Bradford, England on Monday night (27Jun11) sporting a top printed with the message: "F**k Morrissey-solo.com".
The singer has previously spoken of his disdain for the fan forum, where members frequently discuss rumours about his private life and are often bluntly critical of his career moves.
He's even nicknamed it "Morrissey-so-low" - but now the Suedehead singer has taken his dislike of the popular website to new levels by wearing the shocking T-shirt for his encore at Monday night's show.
And it wasn't the only moment of drama during the concert - the power onstage failed at the start of his track Irish Blood, English Heart and the vegetarian singer jokingly blamed meat-loving chef Jamie Oliver for the blackout.