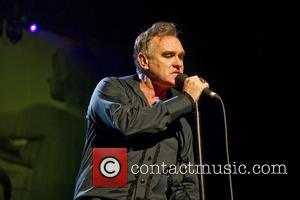 Rocker Morrissey is continuing his campaign to improve the treatment of animals worldwide by calling on Philippine President Benigno Aquino to send a zoo elephant to a sanctuary in the U.S.
The British singer is on tour in Southeast Asia and has used his visit to the region to extend his animal rights work by highlighting issues in the countries where he performs.
He was in Philippine capital Manila on Thursday (10May12) for a show, and before the gig he wrote a letter to the president urging him to approve 'retirement' for 37-year-old elephant Mali, a longterm resident at Manila Zoo.
In the note, sent on behalf of People for the Ethical Treatment of Animals, he writes, "I ask that you send Mali to a sanctuary, where she would have room to roam and be able to be among other members of her own species... Her life consists of extreme loneliness, boredom and isolation in an area that is a fraction of the size of her natural habitat."
Aquino's spokeswoman Abigail Valte told Afp the president's office has received the letter and officials are evaluating it.