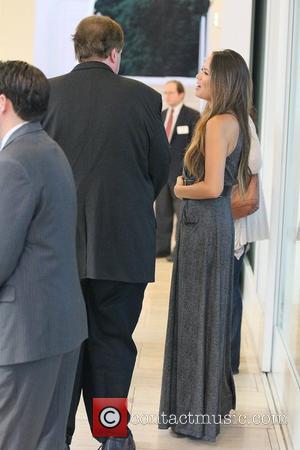 Expectant actress Moon Bloodgood has been suffering violent nightmares during her pregnancy - she repeatedly dreams of slaying women and dragons.
The Terminator Salvation star, who is five and a half months pregnant, is convinced her worries about becoming a parent are affecting her sleep.
She tells U.S. talk show host Conan O'Brien, "I've had a frequent dream where I'm killing someone. I had a dream where I was killing a woman and she was broken into pieces, and I just kept hammering in her face. I don't know what this means, this is awful!
"I think I'm afraid of making a mistake, or I'm going to do something bad as a parent. But I have this dream where I kill someone and sometimes it's a woman, sometimes it's a dragon. (I blame) too much spicy food!"
Bloodgood also thinks her Korean heritage may have inspired her brutal dreams, adding, "I am half-Korean and we do have something that my girlfriend informed me of, it's called K-rage, Korean rage. I definitely have a temper. People think of Asians as really docile, but Koreans are quite fiery and quite fierce in their temperament. So I definitely have K-rage (but) I think I work it out in my dream. I karate chop and kill someone, and I wake up in the day and I'm ready to go!"