Moddi's new single, Smoke, is taken from his third studio album, Floriography, which was released in his native Norway in February 2010 and in the UK in April 2011, through Propeller Recordings. Floriography was produced by Valgeir Sigursson, who has produced albums for artists such as Kate Nash and Bjork.

Moddi is twenty four year old Pal Moddi Knutsen, who hails from a remote part of Norway: the island of Senja. As he teenager, he started writing songs with the help of an accordion and a guitar. His debut album was well received in Norway upon its release and shot straight into the Top 10, without the help of a radio hit.

Moddi's fanbase grew in his home country after an extensive touring period. Shortly afterwards, he attracted the attention of acclaimed Australian duo, Angus and Julia Stone, who invited him on their European tour, where he regularly received standing ovations from the audience.

Moddi was nominated at the Norwegian Grammies 2011 in two categories: Best Male Artist and Newcomer of the Year. 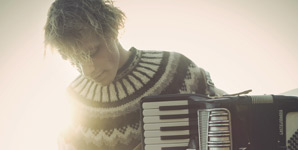