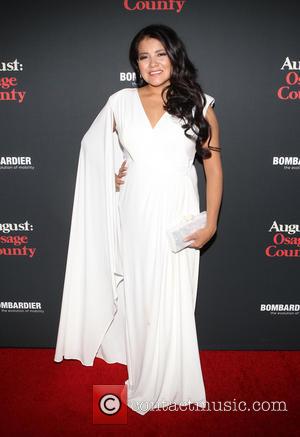 Actress Misty Upham's father has broken his silence about his daughter's death, insisting she did not commit suicide.

The August: Osage County star's body was found in a ravine at the bottom of an embankment in Auburn, Washington on Thursday (16Oct14), five days after she was reported missing.

Initial reports suggested she may have taken her own life, but now her dad Charles has revealed her believes she slipped and fell while trying to hide from police.

In a statement posted on Facebook.com on Friday (17Oct14), he wrote, "She did not commit suicide. We believe she ran into the wooded area behind her apartment to hide from the police. The area in question has a hidden drop off and evidence suggests that she slipped and fell off of the steep embankment when she tried to get out of a view from the road. She simply did not see the drop-off."

He added, "Misty was afraid of the Auburn Pd officers with good reason. In an incident prior to her disappearance, the Auburn Pd came to pick up Misty on an involuntary transport to the Er. She was cuffed and placed in a police car. Some of the officers began to taunt and tease her while she was in the car. Because it was dark they couldn't see that we, her family, were outside our apartment just across the street witnessing this behavior.

"They were tapping on the window making faces at her. Misty was crying and she told them, 'You can't treat me like this. I'm a movie actress and I will use my connections to expose you'. Then another officer walked up to her asked, 'Are you a movie star? Then why don't (you) complain to George Clooney!""

Auburn Police commander Steve Stocker has declined to comment about Charles Upham's accusations, but added, "I had never met Misty or talked to her."

The King County Medical Examiner said the 32 year old died on 5 October (14). Police are still investigating the cause and manner of death.