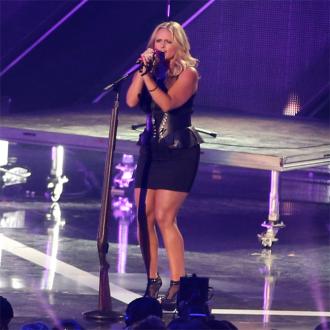 The 30-year-old star fought off stiff competition to win four different categories at the annual awards ceremony held at Nashville's Bridgestone Arena in Tennessee, which was hosted for the seventh time by singer Carrie Underwood and Brad Paisley.

The blonde beauty took home the Female Vocalist of the Year award for the fifth time, Album of the Year for 'Platinum', Single of the Year for her single 'Automatic' and she also shared the Musical Event of the Year gong with Australian singer Keith Urban for their collaboration 'We Were Us'.

Speaking as she collected her Female Vocalist prize, she said: ''I don't know what to say. I can't believe I'm standing here. I can't believe this is my life ... Damn it! I cry every time.''

Meanwhile, Miranda's husband Blake Shelton, 38 - whom she went up against in the Entertainer of the Year and Single of the Year categories - took home his fifth consecutive Male Vocalist of the Year award.

Other winners included 38-year-old Luke Bryan who took home his first ever CMA on the back of five hits from his 2013 album 'Crash My Party'.

Taking to the stage to collect the award for Entertainer of the Year, he said: ''I have long sought to have one of these in my hands.''

Entertainer of the Year - Luke Bryan

Single of the Year - 'Automatic' by Miranda Lambert

Album of the Year - 'Platinum' by Miranda Lambert

Song of the Year - 'Follow Your Arrow' by Kacey Musgraves

Musical Event of the Year - 'We Were Us' by Keith Urban feat. Miranda Lambert

Musician of the Year - Mac McAnally