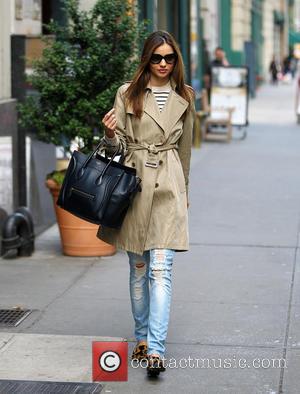 Christmas has come early for fans of Victoria’s Secret model Miranda Kerr. The 29 year old model has posted photos of herself on Instagram wearing a real festive fancy of an outfit, a little Santa-style corset, with white fur trim around the chest and bum. When we say a Santa-style corset, we’re not suggesting that Santa would be caught wearing one of these, we mean it’s a corset that’s supposed to look like a sexy Santa outfit. Not that we’re saying Santa’s sexy, we just… oh never mind, just take a look at the pictures here on the Mirror’s site.

So, whilst the rest of you are sat around waiting for Christmas dinner to be cooked, just think of the lucky Orlando Bloom, who gets to wake up to the sight of his wife Miranda, in a sexy basque, playing Santa’s little helper and rejoicing in giving their baby Flynn a little piano for Christmas, as she recently revealed to a fashion blog.

Despite reports that Orlando and Miranda’s marriage may be on a downturn, Kerr told the Modelinia blog that she was looking forward to spending some quality time with Flynn and Orlando this Christmas. “Just to spend good quality time with my family and to have a good time with my son” was top of her Christmas list this year, apparently. We have a feeling that SHE may be top of a lot of people’s Christmas lists, especially after posting that photo online.