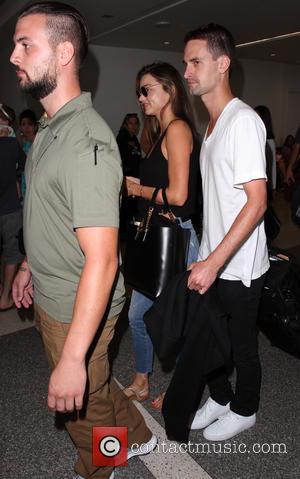 The Australian beauty was posing for photographers as she arrived at the Louis Vuitton runway presentation in Paris when the Ukrainian mischief maker crept up behind her and planted a kiss on her cheek.

Kerr kept her famous cool, simply brushed off the unwelcomed affection and walked away.

Orlando Bloom's ex-wife wasn't the only celebrity to come face-to-face with Vitalii during the annual fashion event - Vogue U.S. editor-in-chief Anna Wintour was also confronted by the prankster on Monday (05Oct15), as he attempted to hand her a pair of bunny ears.

His previous targets have included Adele, America Ferrera, Will Smith and Brad Pitt, who Vitalii lunged at on the red carpet of the Los Angeles premiere of Angelina Jolie's film Maleficent last year (14). The stunt landed him community service after he was arrested and charged with battery and disturbing the peace.